I am not too much into travel buckets – my one and truly only such list has one big objective written down with several colours: See the World! – but crossing the Channel Tunnel – if possible to Pas-de-Calais – was always a secret dream of mine. Thus, when I decided to come back from London by car, I knew that this will finally happen. We left London in the afternoon spending a lot of time on the crowded streets. After around one hour and a half of safe driving, we spotted the first signs announcing the proximity with the channel.

My dear France was only 35 minutes away from me and went very excited about the coming experience. But first, we went through the passport checking on both sides, that went very fast and without any bureaucratic problems.

In-between controls, a little stop at the shopping area, a clean area offering a lot of small souvenires shops and some basic fast food courts.

Once the legal procedure finished, we were ready to go. I was very curious about the channel but even now, a couple of weeks after went through the experience, cannot explain clearly why. The most important fascination has to do probably with the fact that it is the largest undersea tunnel in the world, with around 38 km. long going under the sea. 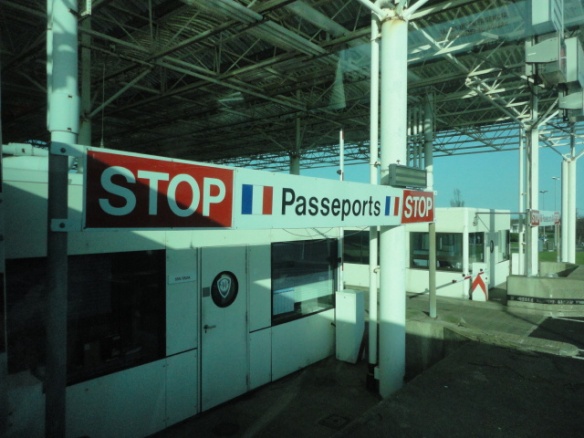 The first plans for such a project were discussed as far as 1802, following the designs of the mining French engineer Albert Matthew Faner. At the time, it was aimed to serve the transportation with carriage, but till 1830, the idea of the construction of rail networks was already in sight. In 1867, on the occassion of the Exposition Universelle de Paris, Queen Victoria and Napoleon III agreed over the necessity of the channel, but the dream come true only at the end of 1990.

Most delays were due to various financial problems and some political misunderstandings too. As for now, the channel traversation is part of the daily routine and can be done by train and car in just 30 minutes.

The process of crossing as such does not justify at all my enthusiasm and curiosity. It may be another example of attraction – my personal one – for scientific achievements that I don’t necessarily understand in their technical details and that fascinates me especially for their inhuman perfection.

The cars are entering the train platform, some of them with colourful wagons that contrast with the dirty look from inside. There are special schedules for the trains, but we were lucky to be in time and there were some space left for us. The interior is in fact a big parking place and it reminded me of the recent water crossing to Konstanz, the last summer. Except that you don’t see anything. Indoors, everything is that quiet that you might think that you actually are not moving at all. The speed is probably so high that you end up by not feeling it at all.

After a while, the waiting is getting bored, but you are allowed to go out of your car and go on the other side of the silver doors and visit the restaurant or the restrooms. Of course I wanted to do it too – mostly disappointed that nothing special is happening during the much awaited travel experience – but after a couple of minutes I was still passing by another cars and decided that I better give up and come back to my car.

It was an inspired choice as the traversation was done fast, in around 30 minutes. The pleasant view of Pas-de-Calais and its vineyard hills were welcoming us and I forgot all the disappointments. The worse part was to come: my decision to go back to Berlin from London by car, only because of the Channel, was worth 25 hours of driving across Europe, mostly during the night. But following the motto: Better now than ever, it was just another travel experience that you should go through it if you are really interested about what is done and going on in this world we are living.