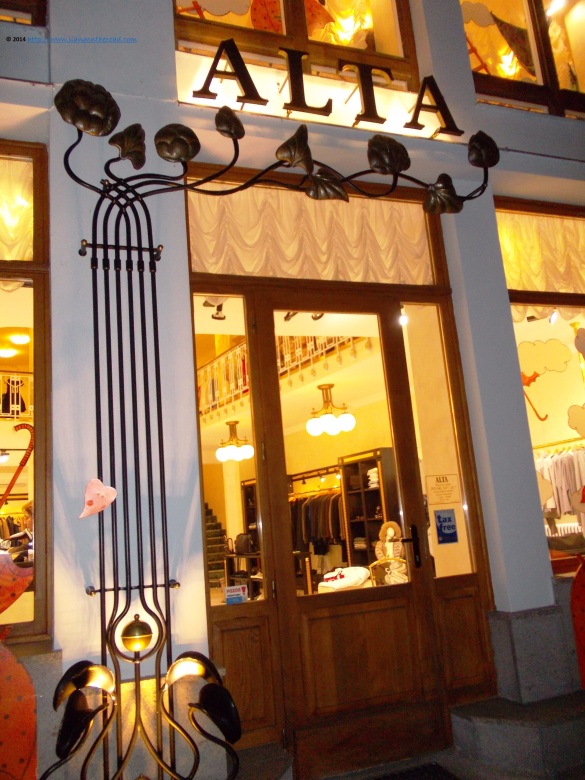 I wanted to visit Karlovy Vary for a very long time, but not obviously for very logical reasons. Blame it a lot of Central European literature, including Czech, indiscriminately and voraciously consumed during my childhood, or the regrets of never being able to attend the Karlovy Vary Film

fans gathering in Central Europe.  As the last year was one of my best in a while in terms of travel, I marked another priority (out of many hundreds) on my travel bucket list. 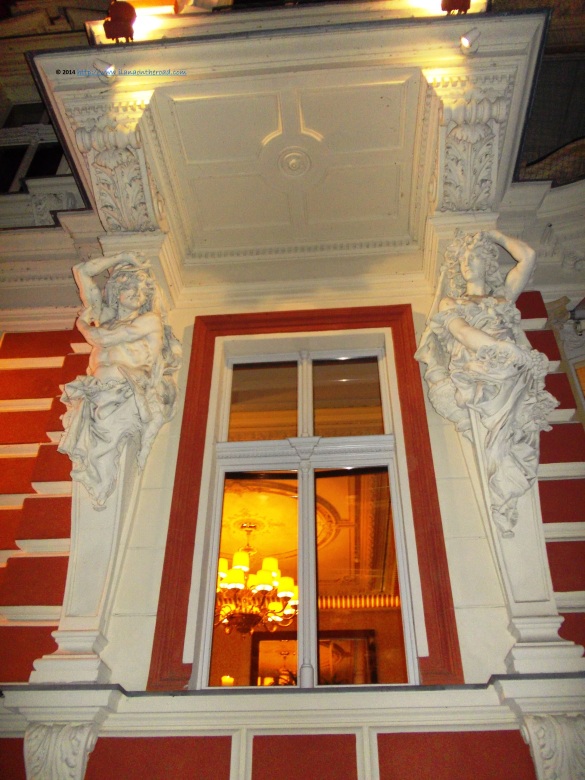 I arrived there in the middle of the autumn, at the beginning of November, exactly at the end of the spa season. But the city was far from being dead, as I noticed while walking slowly from the bus station where I arrived from Prague to Dvorak Hotel, that generously hosted me during my stay.  I not only got to know the local generosity, with people helping me to get the right directions

, but also a very glamourous night life, with luxury

shops open till late in the evening, and ladies in fancy dresses checking the last offers or maybe a must have Faberge egg or a massive gold

pacifier, who knows? Only the steam of the famous hot springs created an ambiance of mystery and suspense. 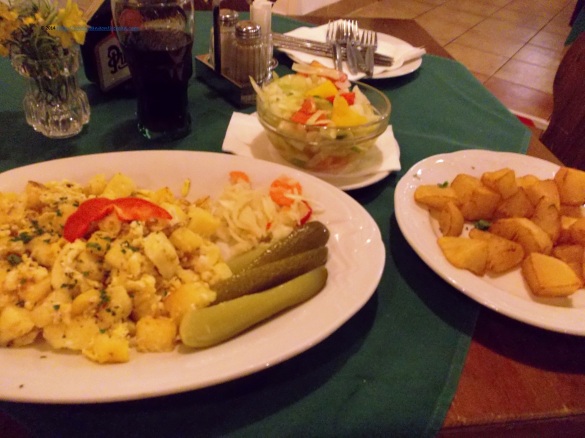 Ignoring the late arrival and the whole day of travel by bus from Berlin to Prague and then to Karlovy Vary, I decided to have a short tour of the central area. Hungry, I ended up in a German-Czech local and guest house, Egerländer Hof with many historical references on the walls of what used to be the Sudeten area and dusty stuffed animals. I ordered some Czech dumplings with eggs and mashed potatoes, whose oily and too salty composition gave me some nasty stomach pains the day after. Maybe the antidote would have been the famous Becherova, a local Anis liqueur made here from 200 years, but was not that brave to try it. 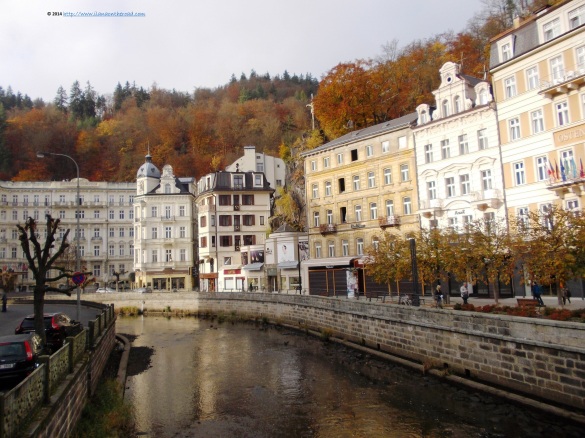 The next morning, a beautiful autumn palette that seemed hastly painted overnight on the hills around invited me to go out of my bed as soon as possible and start the city discovery. 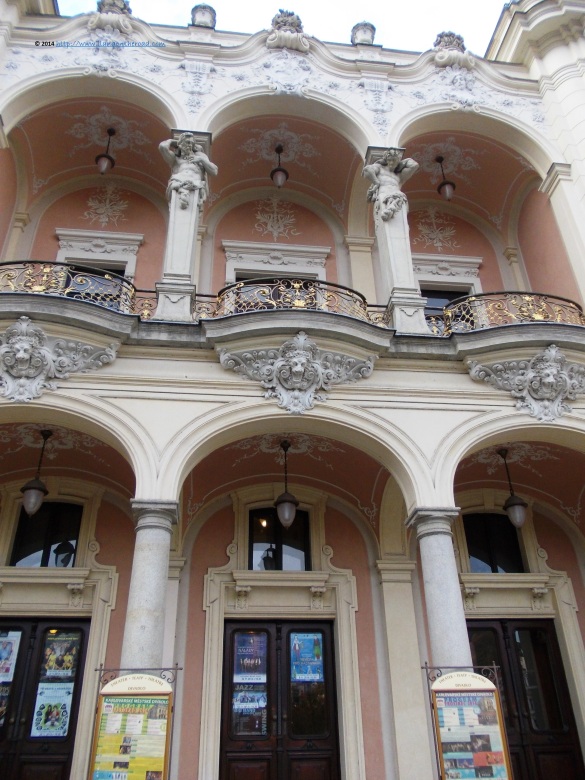 If ones arrives in Karlovy Vary dreaming about a very active night and day life, he or she may be disappointed. The life goes slow, except the exciting times of the film festival, with slow walks  and shopping sprees, before or after some treatment sessions. The local theatre, offering shows not only in Czech, but also in the omnipresent Russian, spoken everywhere by everyone, brings more cultural events in town. Some local jazz festivals held here are opening the doors to everyone in love with the universal language of music. 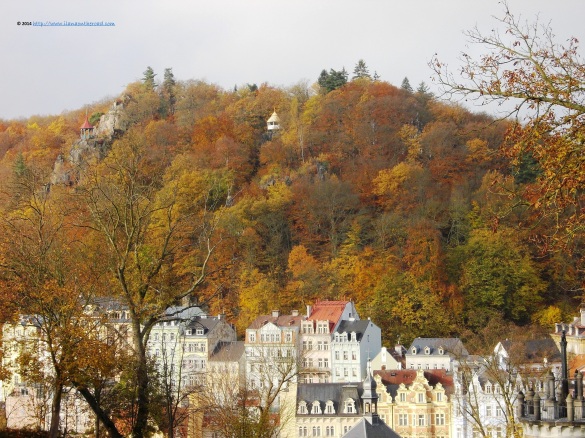 The mild light and colours of the autumn are calling me though for some hiking adventure, a call I am ready to answer, as soon as I am able to see the main points of interest in the city. 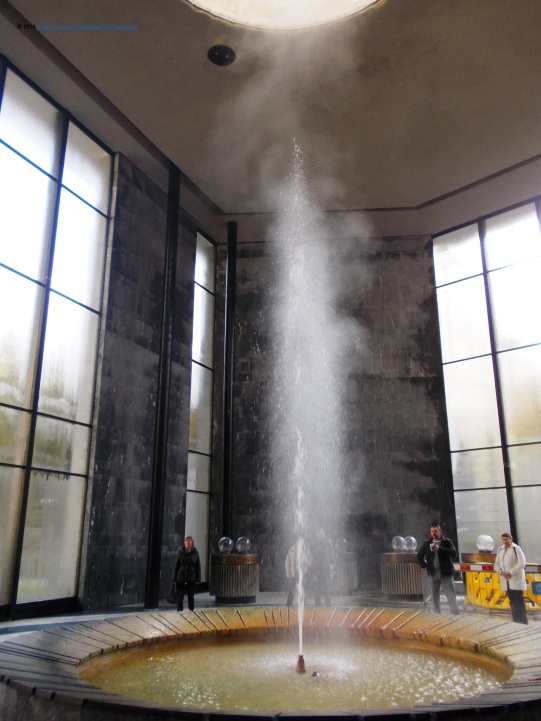 Most part of the people coming here are for a more serious reason than I: the unique qualities of the thermal waters. Used for treating problems of the digestive system, diabeters, weight excess, post-oncological diseases treatment and metabolical diseases among others, the mineral waters do have the same composition, but their health effects differ up to their different temperature and carbone dioxide content. The spectacular strength of the giant spring (Vridlo) makes the beautiful architecture around to look like doll houses. 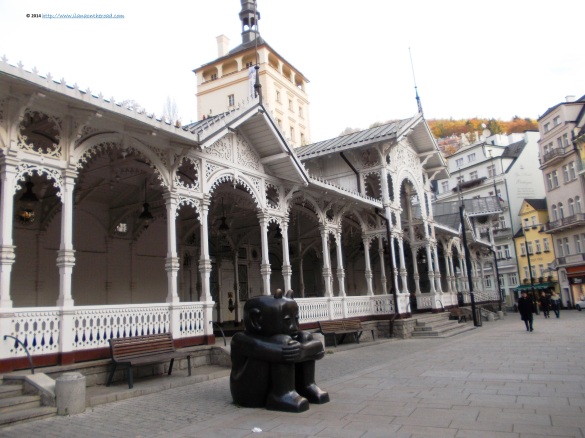 As the springs are spread all over the city, decorated pavillions were made in order to allow people to get to the mineral waters whatever the weather conditions. 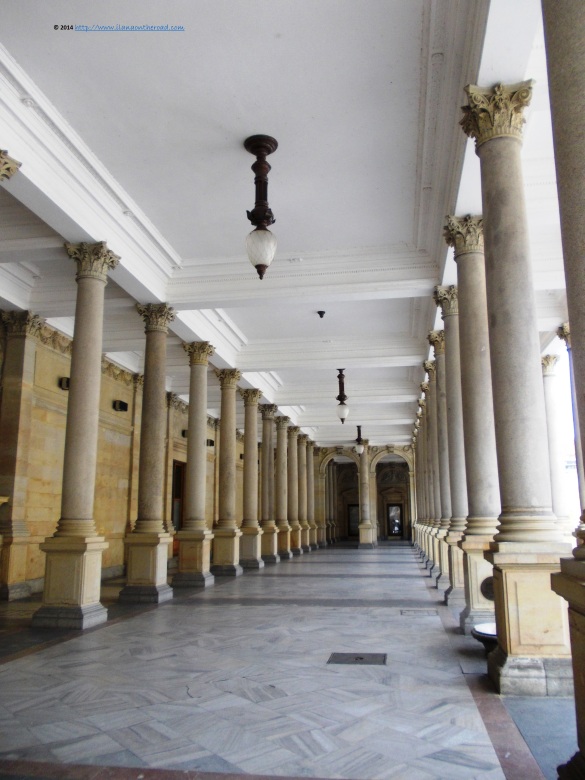 One of the most famous such construction are the Mill Colonades, hosting 13 major springs, built as a neo-Renaissance Temple, by the same architect who designed the National Theatre in Prague. During the high-season, special open air concerts are creating an ambiance that makes the sick visitors forget for a while the reasons they are here. 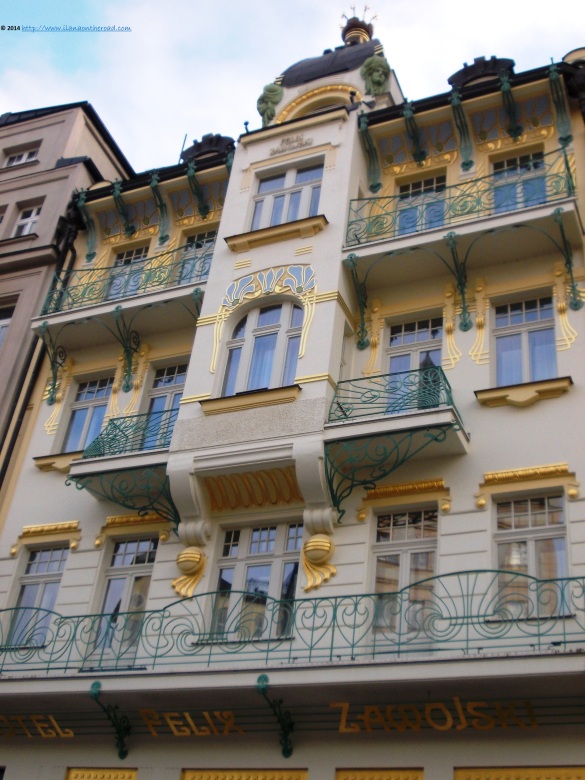 When I am not too busy to find out about the special mineral waters, I am amazed by the architecture, that combines all the possible Central European styles, with fine golden lines matching green decorations, or with Portuguese tiles bordering big windows of building covered by castle-like rooftops. 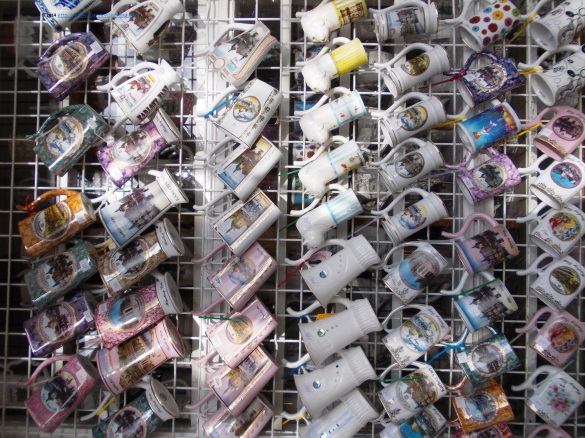 The visitors are busy sipping their mineral waters from the special bottles especially created by the legendary Ludwig Moser, the famous porcelain producer. The pipes were added later. Nowadays, the Moser factory can still be visited, and many of the locals in Karlovy Vary used to work or are still working there. The special patterns of his glass work, oftenly combining porcelain with crystal, are another trademark of Karlovy Vary that can be found on the exquisite lunch tables of many world personalities, including European royal families, such as the new Spanish king. 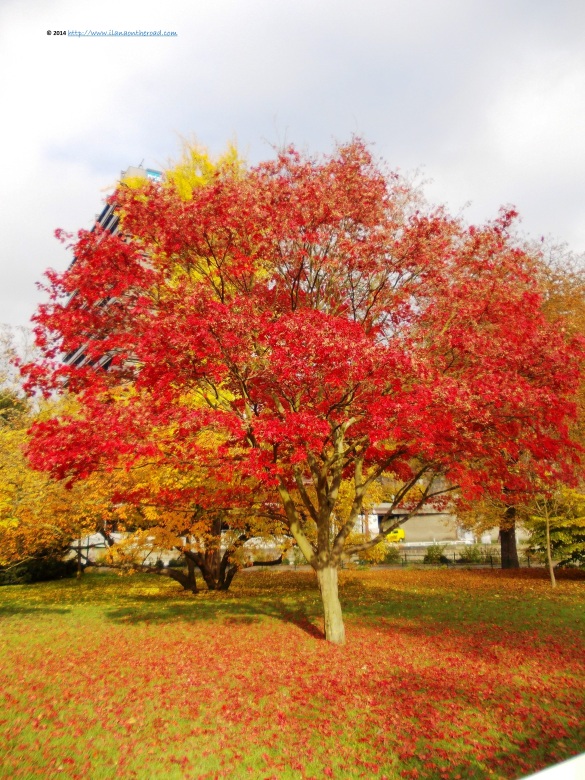 The autumn is the queen of Karlovy Vary now, and the leaves from the parks are displaying passionate nuances of red and burning yellows. 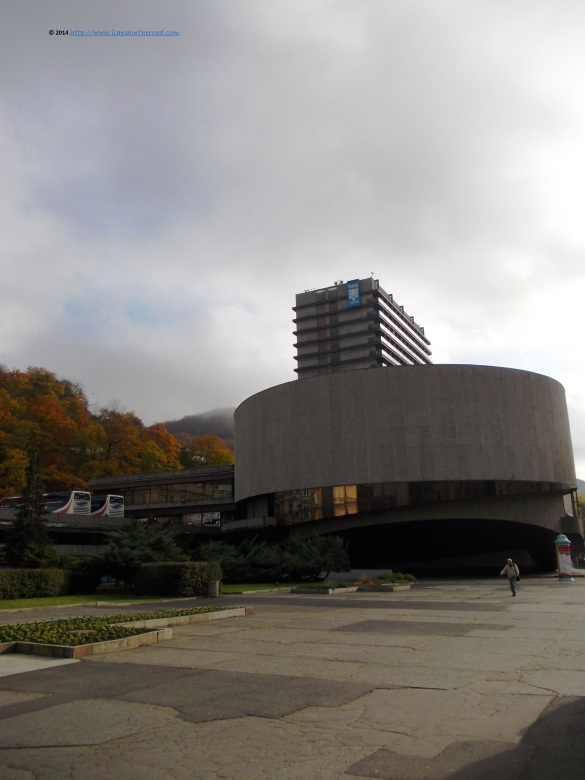 Only the too much serious building of Hotel Thermal, hosting for over 49 years the Karlovy Vary International Film Festival brings you back to a less spectacular reality. Held in the first week of July, it gathers famous movie personalities, among which John Malkovitch, Robert de Niro, Woody Harelson, Sharon Stone, Leonardo di Capri, Gerard Depardieu, Franco Nero or Fanny Ardant. Many of the famous guests do have their own star on the Hall of Fame in the front of the luxurious Grandhotel Pupp, where the VIP guests coming to town are usually hosted. 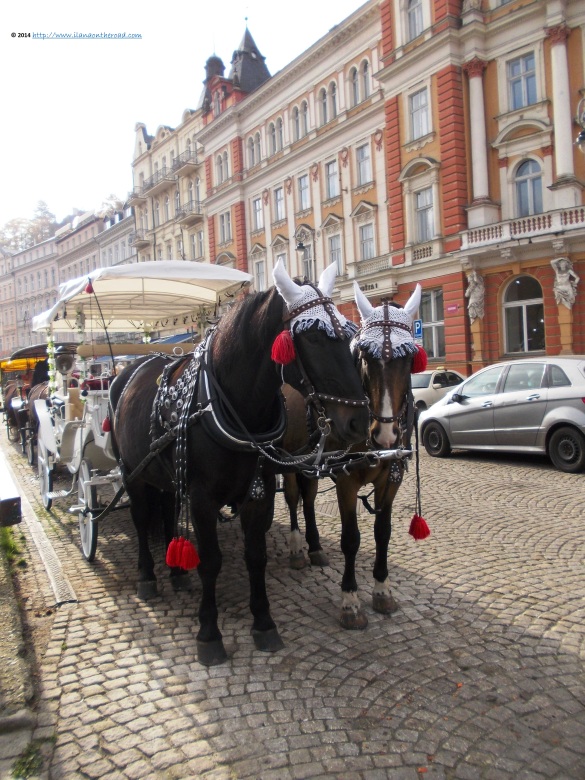 The heavy impression of the film festival venue is easily dissipated by the mild colours of the architecture and the diversity of the options to spend the easy life in Karlovy Vary. When the weather allows, a short tour by carriage can be a pleasant option. 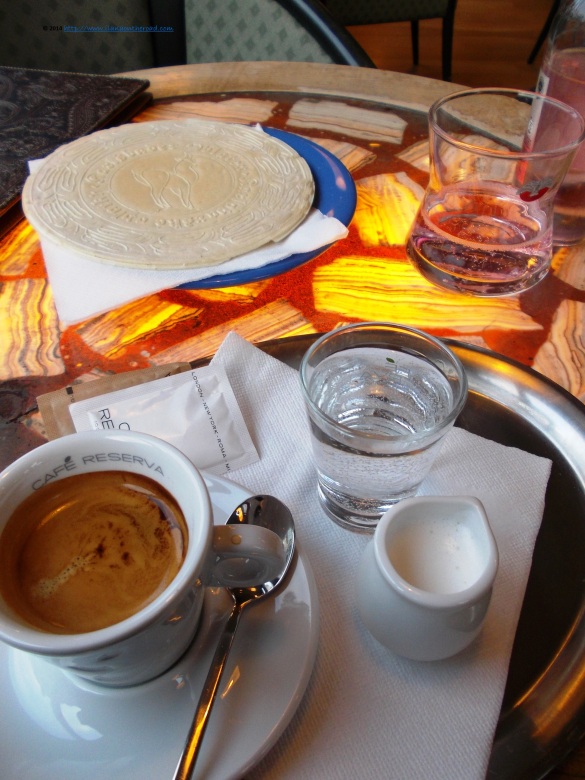 For a short break before planning the next stage of my trip, I am back to the Giant spring area, at Cafe Reserva, where I sip a  coffee made with mineral waters – all I can say is that it is a really good strong coffee as I am used with – with some Oblaste, thin rice waffers that are available  in town in different flavours. 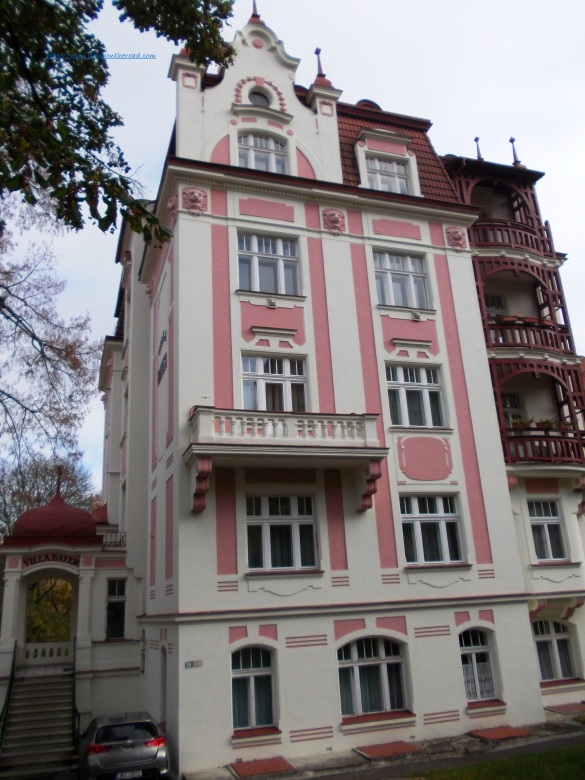 Although buses are available in the city, as well as cabs, I am doing my best to enjoy as much as I can the rays of autumn lights. I pass fast near the tempting shops from Lazenska street, not without a short stop looking at the special Mikimoto pearls, or the Hasi Shopping Center, a building where Freud stayed long time ago, and I go up on one of the many streets around, in an area with many villas and  hotels with discrete entrances and huge parking spaces. 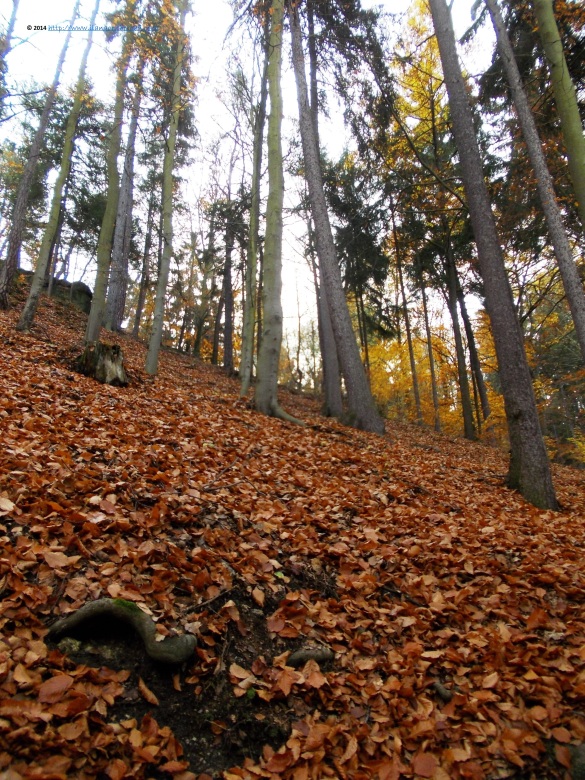 I don’t need to think twice before heading on an alley with stairs and foliages, till the top of a small hill from where I can see the crowded buildings of Karlovy Vary. 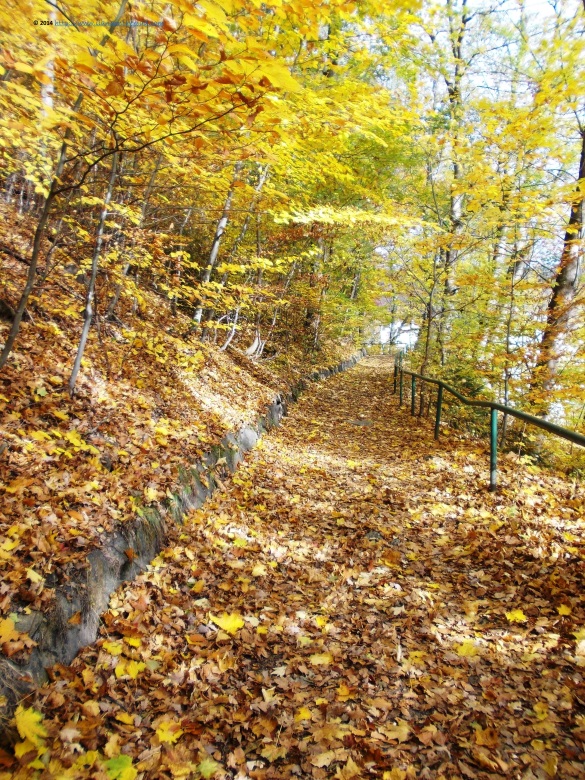 The hiking is short and relatively easy, but comfy shoes are required. Some people do Nordic walkings – there are many such routes in many places around the city – some, like me, just enjoy the pleasant beginning of the afternoon. 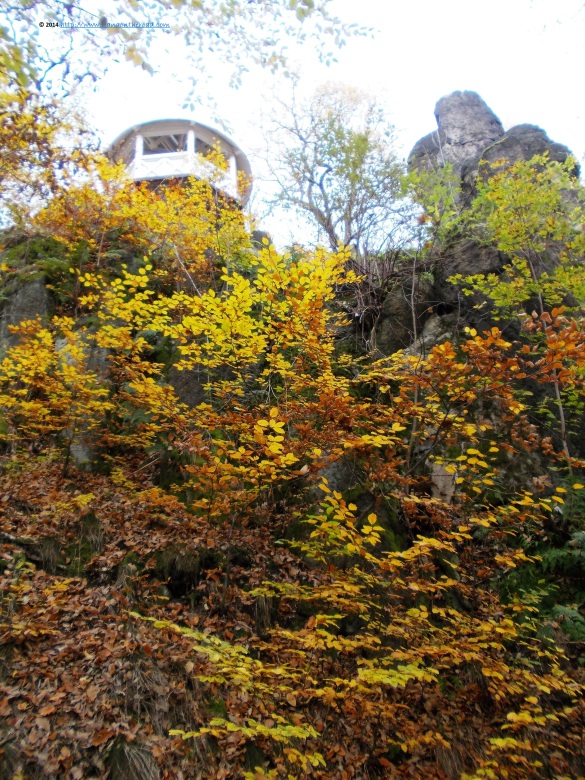 Behind the wild stones covered by leaves, the discrete human intervention makes you feel safe. 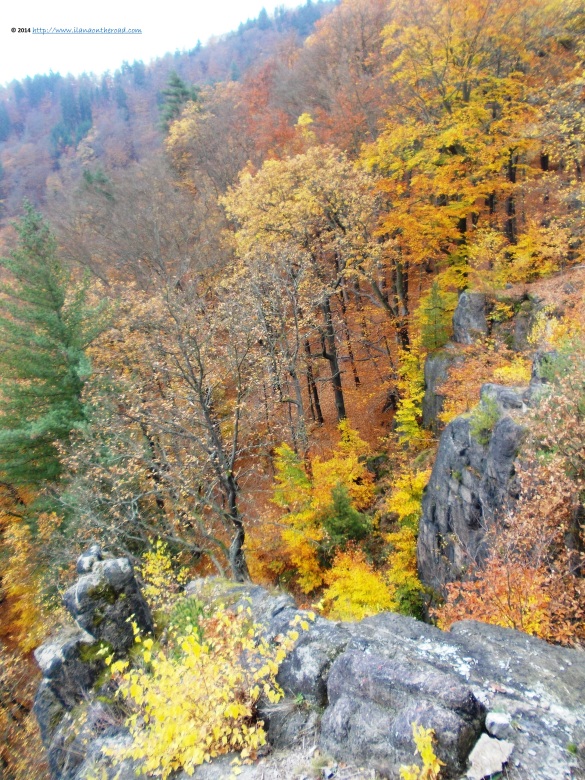 The beauty of nature is simple and inspiring, and before I am heading back, I enjoy the quietness and the original colours. 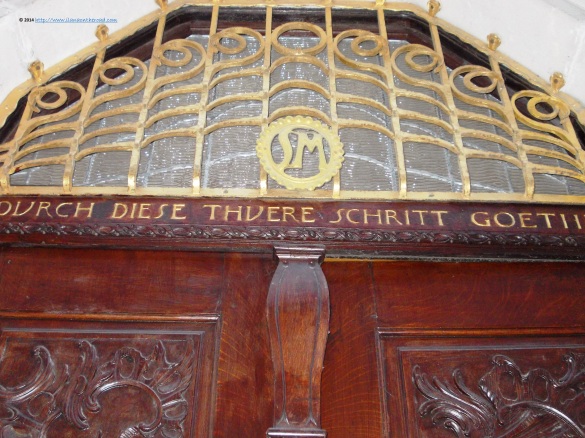 The combinations between nature and hard human work probably fascinated many European intellectuals and crowned heads that tried to found a remedy to their maladies from the spring waters here. Goethe, who ran here several times for meeting a much much more younger lady, Freud, Marx, Franz Joszef and Sissy who loved so much the oblates it seemds, or Peter the Great for whose highness a special door was modified in order to allow him to go in or the Turkish reformer Atatürk were some of the famous visitors. 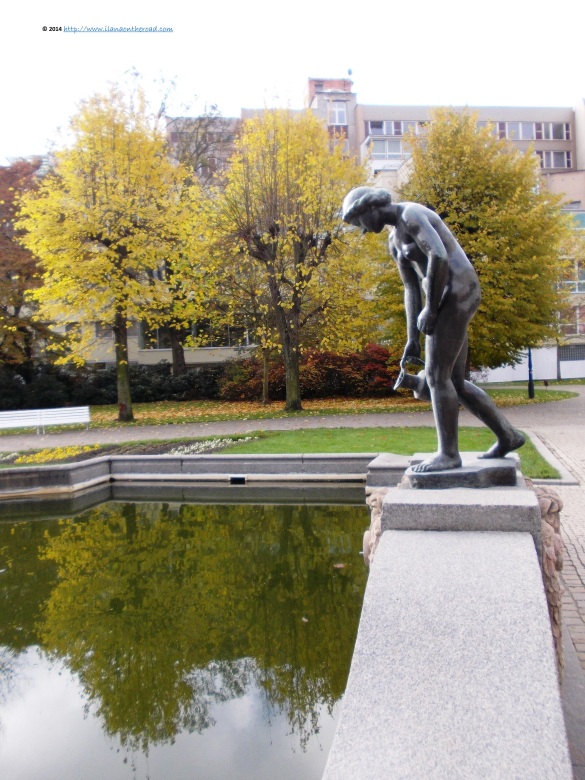 Nowadays, the visitors only looking for wellness, are tempted with a long list  of spa services, that includes a variety of treatments, based on wine, beer, hemp or using various techniques aimed to regenerate and rejuvenate the body and mind (more about the best spa options in town in my next post). 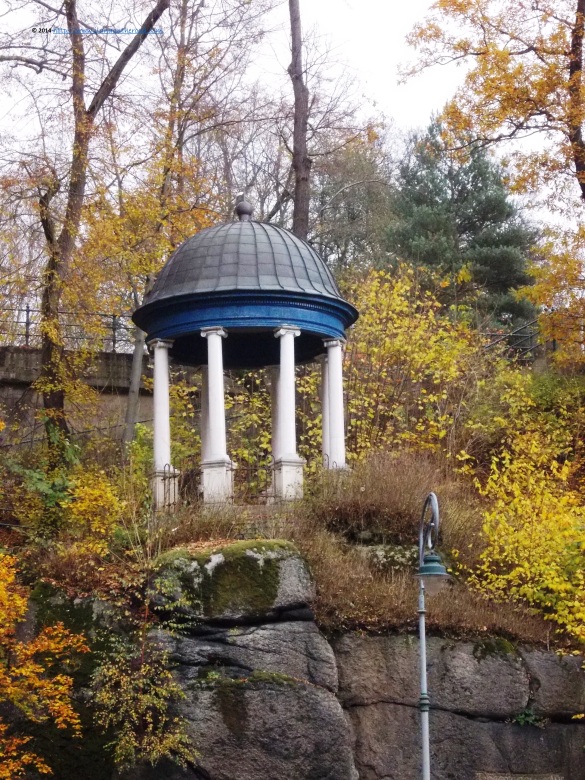 My first full day in Karlovy Vary ends with a full tour of the main historical and touristic sights of the city offered by a very talented guide booked by my hotel. As usual, getting in touch with local people brings valuable information, and most hotels are able to offer such knowledge, mostly in Russian and German, but also English.

The next day, early in the morning, I am ready for more hiking. I follow the street near the Carlsbad Plaza, surprised to discover also a Thai and Chinese restaurants, after spotting mostly local Czech or German-inspired cuisine, or some classical Italian restaurants. From Goethova street, I arrive at the 60-year old Karlovy Vary Art Gallery where together with some school children I have a look at an art exhibition by a local artist. From the Park Hotel, I start doing more hiking on the top, and the banks every couple of hundreds of meter guarantee that I should not worry for getting exhausted any time soon. 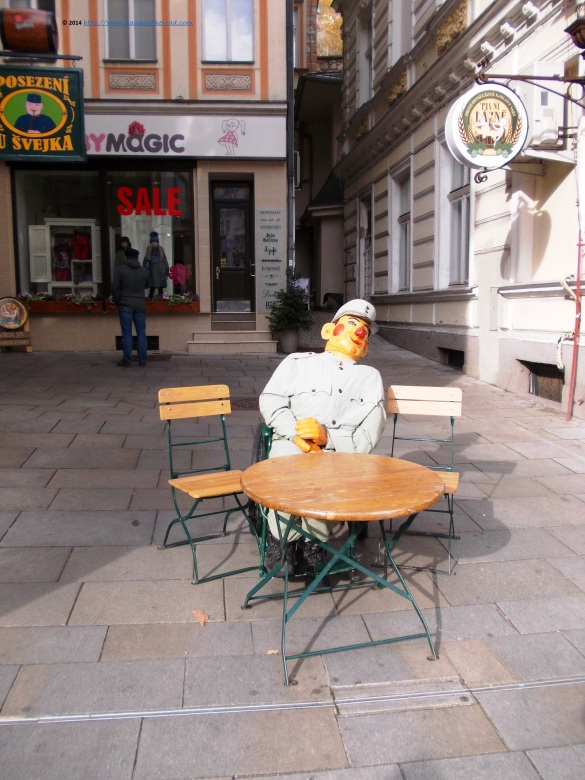 Soon, it is about time to say ‘good bye’ to Karlovy Vary for now, not before saying a last hello to the huge statue of the Soldier Svejk, a typical Czech character, a busy tourist spot for selfies most part of the time. 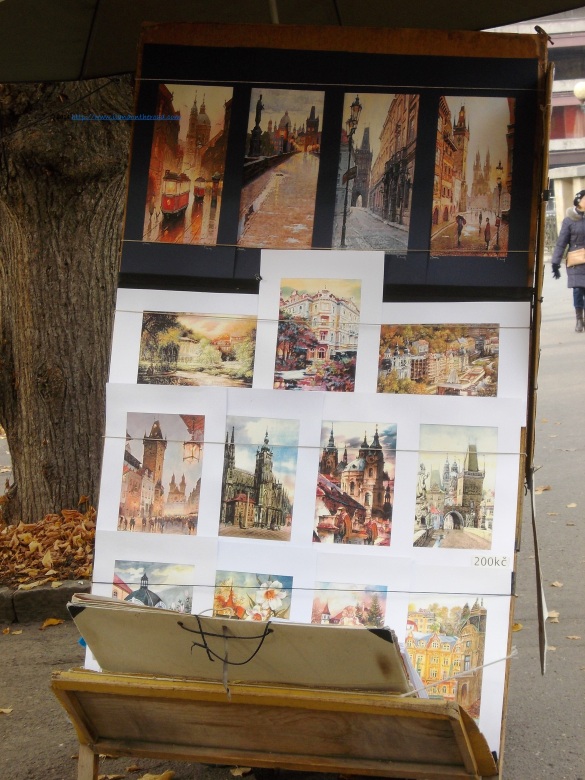 The beautiful pastels of the live exhibition that Karlovy Vary offered me in the last 48 hours was worth the long years of waiting. There are places you might fell in love with before visiting them and following your feelings can prove to be a perfectly inspired decision.

Fore more visual insights from Karlovy Vary, have a look at the dedicated Pinterest board: https://www.pinterest.com/ilanaontheroad/karlovy-vary-czech-republic/

6 thoughts on “48 Hours in Karlovy Vary”