My 3-week long trip to Central and Eastern Europe started with a pleasant surprise: I was offered the chance to spend 2 full hours in Prague. After ten years of unjustified absence from the city, I was able to visit the city twice within the last 6 months. As during my February trip I made almost the full list of to-dos in the city, I had the freedom of gazing to the buildings or just walk in under the sunny sky of this summer. With sure and (very) fast steps, we headed directly to the old town area. 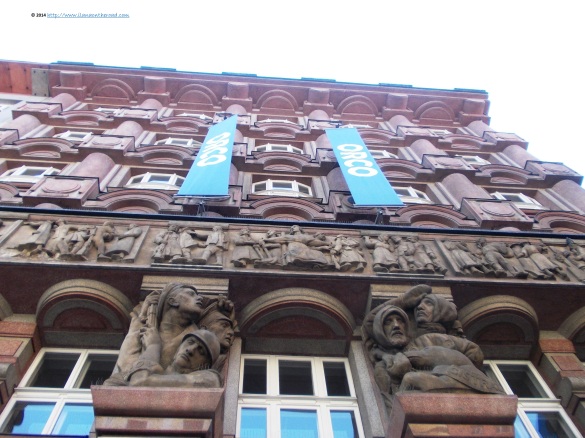 I will never have enough time to fully understand and admire the spectacular architecture and art displayed on the streets of the city. From the massive realist statues that seem to fight hard to get a life of their own out of the stone carvings to the delicate Art Nouveau details, my eyes were challenged to keep a permanent focus. 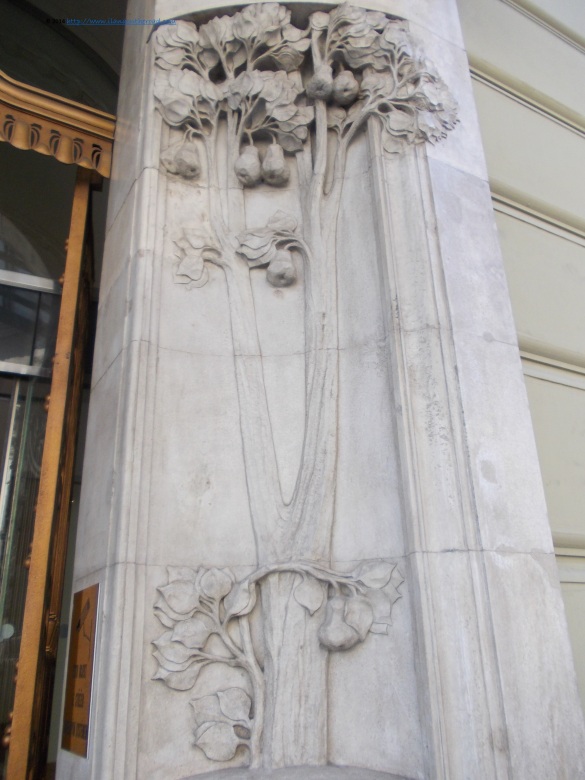 Many of those details I’ve seen more than once during my trips in the city, but you can never have enough of too much beauty, I suppose. 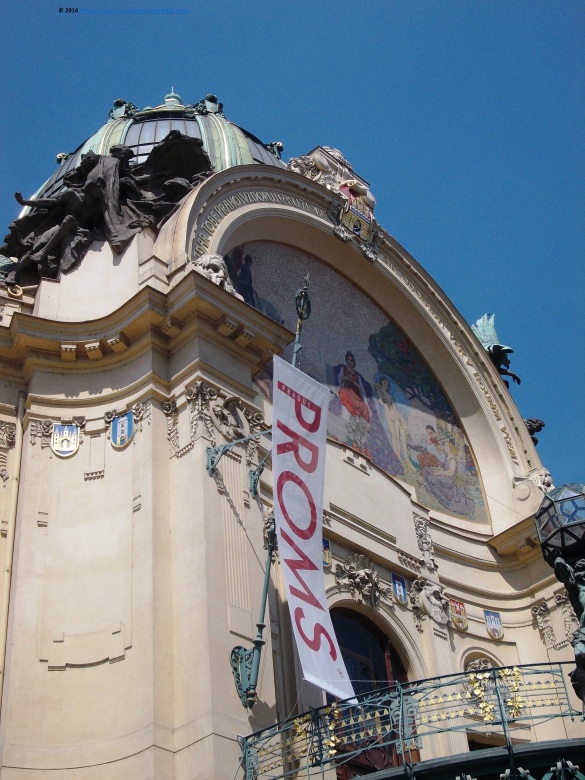 My wandering to the city had at least one clear direction: to spend a bit more time at the Municipal House, right near the Powder Gate. The massive construction that was inaugurated in 1912 after 7 years of work is situated on the former location of the palace of the King of Bohemia who lived there in the second half of the 14th century. The historical details might be not obvious for the first-time visitor, but the beautiful embroideries of the building and the elaborated glass paintings and decorations are unforgettable. 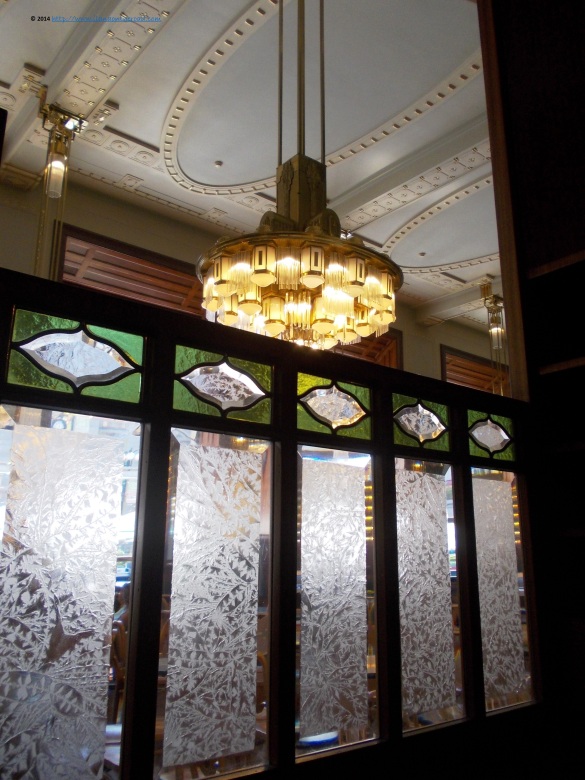 Every inch of wall and surface was carefully adorned with elaborated glass walls painted mostly in the Art Nouveau style. Nowadays, the municipal house is a distinguished concert hall – Smetana Hall bearing the name of a famous local composer, but it was used for various purposes in the last century. Here, for instance, was signed the Czechoslovak Declaration of Independence in 1918.

The hall – that can be visited with guided tours – continues with a big coffee, Coffee Kavarna, where I dreamed to have my morning coffee for a long time. Before the coffee arrived, I spent a lot of time admiring the golden outlines of the interior decorations, delicately insinuated alongside the massive white marble. 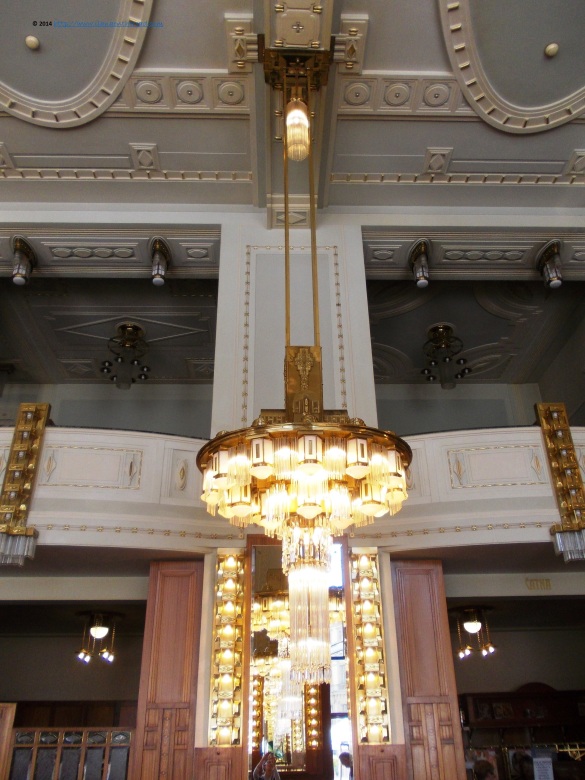 The lightning installation reflected in the massive mirrors are creating an even greater impression of a huge space. If you have a lot of imagination, you might feel invited to a secret ball at a castle.

The entrance reminded me of old pieces of exquisite jewellery. Too much decorations are always a dangerous taste decision, but a creator should always assume the risk of going beyond the limits of accepted standards.

Overloaded by colours and golden rays, I finally had my coffee paid with the local currency carefully saved from the last trip. Given the ambiance, the prices of a breakfast are much higher than the usual cheap offers around, and the coffee was not the best in the city, but I was too happy for finally spending time here for excessive kvetching.

With some more time left, we took fast the road under the Powder Gate trying to see at least Charles Bridge in the summer. The only discomfort of the last trip was the late winter cold, which limited significantly our freedom of movement. Now, people were all over the places, many of them wearing delicate cotton umbrellas to get protected against the hot sun. Cleaning cars were spreading water on the streets aiming to bring more freshness.

The streets were full not only with tourists, but with many more street artists, either presenting their works on sale, or sketching within minutes portraits of the visitors interested to leave with a special personalized memory from Prague.

The colours of the painters were joined by the exuberant outbursts of sounds uttered by the street bands. Artists were almost everywhere and most of their music was very pleasant to the busy ears.

Shortly after 12 o’clock, making your way through the streets was not an easy task. Especially if you hurry up as we did. Most shops in the old town were open and the offers of restaurants were becoming even more tempting. Languages from all over the world were heard on the streets, creating a good feeling for the indefatigable traveller in me: world can be so small sometimes!

In the front of the Prague Astronomical Clock we went through another new experience: waiting together with a significant mass of people the last three minutes before 13 o’clock. Some were there with a purpose, some – like us – were simply by accident trying to get into the exciting mood of all the people gathered there. When the time had come, it was hard to stay untouched by the wave of excitement of people listening to the first gongs.

We finally made it to the Charles Bridge as well, although for very short couple of minutes only, and at least with two new memories about Prague, we headed back to the bus station, waiting for the return in another dear city of mine: Budapest. To be continued.

For more insights from Prague, have a look at the dedicated Pinterest board: http://www.pinterest.com/ilanaontheroad/prague/

There was an error retrieving images from Instagram. An attempt will be remade in a few minutes.