My one year in Japan started completely out of nothing. I was looking for a professional change, trying to switch pages from an unsatisfactory work in the media to a something else that I was unable to define. As usual in such situations, I asked the opinion of friends and acquaintances about the possible next steps but nothing interesting went out. It was the beginning of a new year and the openings were expected only in March I was told. Out of nowhere it appears an opportunity to work as a PR for the Aichi Expo 2005 and wonder why, no one wanted to take the job.

Except my good media relations and skills in the world of everything mass-media, plus some foreign languages in the right and left pocket, and some Japanese literature that I started to read by accident a couple of weeks ago, I had no idea about Japan. I was illiterate, did not talk with Japanese people and had no idea how to say ‘thank you’. Recognizing my limits, I was told that I will always be assisted by a professional translator and I still have enough time to get acquainted with the culture as in less than 5 days I would be on the road to Tokyo and Nagoya for a couple of ground trips before the big move for one year. I decided that it will be the big challenge of my life and without regrets, I left my office at the newspaper and prepared my family with my newly acquired PR skills about what will happen the next months. No resistance by far, and I was assured that I will have the full support for coping with the regular house management issues and other bureaucratic problems.

The next days were so busy with the new changes and challenges that I forgot completely to open a new book about Japan. Internet in 2005 was of course, but without Facebook and Twitter and blogs and personally, I was too much focused on the big news and big newspapers to pay attention to weblogs and e-travel diaries that were for sure available at the time as well.

I took the plane, changed in Frankfurt – my first ever contact with the German airlines – and went forward to Nagoya. It was my first transatlantic flight and my first meeting with the fear of the jetlag. Intuitively, I decided that I should sleep as much as I can and fully enjoy my stay on the ground, even though I would land in the middle of the night. I was there on a personal mission, to get the full flavour of Japan spending as much time as possible knowing the culture and the people, when I was not supposed to expand my PR skills.

After 12 months, I was a better PR person and ready to work as a PR for the time being, but also kept a firm foot in my journalistic field. I know it is not recommended to wear two hats at once, but if you think that your mission is as a writer, the PR can be a temporary solution as a protection against the bad weather of the doubtful journalism. The Japanese and foreign journalists I’ve met increased my trust that quality media still has a chance, and the development of the online media tools gave me more courage to do again the switch to the journalistic field.

However, the (intensive) work had its price. Even though I had the opportunity to see a lot of Japan and went more than twice to Tokyo, there are many places that I was unable to visit due to the lack of a proper vacation. Most of the time I travel for business/job-related purposes and did not have any chance to see places like: Okinawa, Osaka, Hiroshima, Nagasaki, among others. I never saw the Mt. Fiji and I will always dream about going back to Kyoto, a place where I felt the magic.

I’ve learn how to use chopsticks as a professional, to say 2-3 Japanese expression with the perfect accent – every time when I go to a Japanese restaurant and I use them I will still gather the admiration of the guests, how to train the Western journalists to behave when the Emperor is around and how to set up the almost perfect press trip.

For one year, my house was a small hotel in Toyota City – the city where the famous car factory was located – and it was not pleasant to return home and to see that no one will make my bed or clean the room if I don’t do it.

One of my biggest fears when moving there was the food. I had some vague ideas about what I can expect, confusing the Japanese cuisine with the comprehensive Chinese one and I was almost sure that I will starve. True is that the intensive work of 6 full days the week helped me to keep a very thin figure, but I always had three meals the day and I did not experience any single allergy or food complication. I tried a lot of fish and rice and forgot what it means to have a good glass of wine or a real sweet cake. On the other hand, I discovered one of my biggest loves to be: the green tea, not only in a cup of Japanese tea – I did not participate to any official ceremony of tea while there, so I have another reason to return there in the near future – but especially in cakes. I learned how to prepare paper and how to do my own pottery.

Besides the feeling of a full freedom, when I had a year ahead to learn and to live a life completely different from everything I’ve lived before, I had the experience of a different culture, beautiful by its challenges. At the time, I did not have any blog and due to my permanent migrations from a country to another in the last 8 years, I did not keep the 3-4 articles dedicated to my Japanese experience. Unfortunately, I lost as well the pictures took in Japan so don’t count on my photographic skills for the next articles.

There will be many posts about Japan in the next days so keep an eye on the blog! 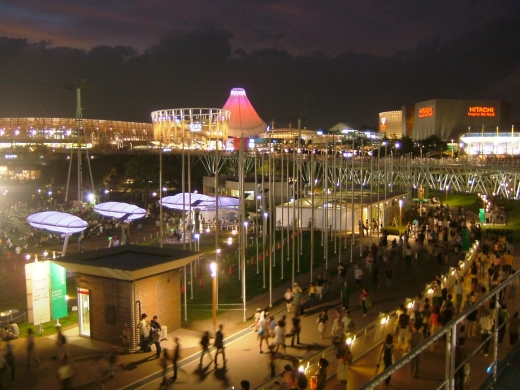 2 thoughts on “One year in Japan Episode 1”